Giuseppe Sarto – is the patron saint of our school.

Giuseppe Sarto was born on June 2, 1835, in a little farming village in Northern Italy named Riese. He was the second eldest of ten children. Though poor, his parents valued education and Sarto attended the local parish school. During his primary school years, his intelligence and high moral character caught the attention of the pastor.

At the age of 11, Sarto received a scholarship to attend a high school eight kilometres out of Riese. Each day, he walked the long distance to and from school. By the time he completed his tertiary education, Sarto made it known that he had felt the call to priesthood. However, he felt this was beyond his grasp. His parents saw that the will of God was in their son’s calling, and they did everything in their power to encourage him.

The local pastor came to the rescue once again, arranging another scholarship, this time for Sarto to attend the seminary at Padua. In November 1850, a young Sarto arrived at Padua and was immediately taken up with the life and studies of the seminary. He worked incredibly hard during his time in the seminary and was finally ordained a priest at the cathedral in Castelfranco on September 18, 1858.

Father Sarto worked as a parish priest for 17 years. He believed his call was to encourage those who were poor to lead Christian lives and to help them overcome their financial difficulties. During his time as a priest, Father Sarto was appointed as the spiritual director of the major seminary, Canon of the Cathedral at Treviso, and chancellor of his diocese. Despite his many duties, he often journeyed from the seminary into the city to teach catechism to the children, and he organised Sunday classes for those children who attended public schools, where religion was banned.

In 1884, Pope Leo XIII appointed Sarto as Bishop. Nine years later, in 1893, His Holiness, Leo XIII, elevated Bishop Sarto to Cardinal and appointed him Patriarch of Venice. With characteristic energy and spiritual strength, Cardinal Sarto showed immense care for the clergy, seminarians, the poor and children. He spent long hours teaching the young and old about Christ.

In 1903, Cardinal Sarto was elected to become Pope. He accepted, taking on the name of Pius X, and on August 9, 1903, was crowned as Vicar of Christ on earth.

Pope Pius X desired, in the words of St. Paul, “to restore all things in Christ.” (Eph 1:10). The prime means of accomplishing this restoration was seen by Pius to be through the clergy. Throughout his reign, the Pope exhorted bishops to reorganize the seminaries and to obtain the best possible training for these men who would instil in others the knowledge of God. The religious instruction of the young and old became the second most important means toward the Christian restoration.

Pope Pius X is often referred to as ‘the Pope of the Eucharist’ for he issued decrees which allowed for the reception of first Holy Communion at an earlier age than had formerly been permitted and encouraged the frequent reception of the Holy Eucharist by all Catholics.

The Pope likewise vigorously promoted reforms within the liturgy of the Church, since he felt that these were long overdue. He initiated changes in Church music and worship and began a biblical institute. Pope Pius X also initiated and closely supervised the construction of the Code of Canon Law.

Pope Pius X was an ardent champion of Christian social action. He believed that real peace could only be achieved through social justice and charity. Pope Pius X sponsored and sheltered refugees with his own resources, he wrote an encyclical encouraging Latin American bishops to improve the treatment of native people working on plantations and he worked to stop the world from going to war. When Europe entered World War I, Pius was heartbroken and said, “I would gladly give up my life to save my poor children from this ghastly scourge.”

A little more than a month after the outbreak of the war, Pope Pius X contracted influenza.  His weakened constitution could not combat the illness and the end for the Christ-like Pius came peacefully on August 20, 1914. The world, despite being in the throes of war, paused to mourn the gentle and humble man whose last will and testament gave such an insight into his character. It read, in part, “I was born poor, I lived poor, I die poor.”

On June 3, 1951, Pius X was declared Blessed, and finally on May 29, 1954, amid the traditional pealing of the bells in the great churches of Rome, Giuseppe Sarto, the humble parish priest of the world, was canonized a saint of God. 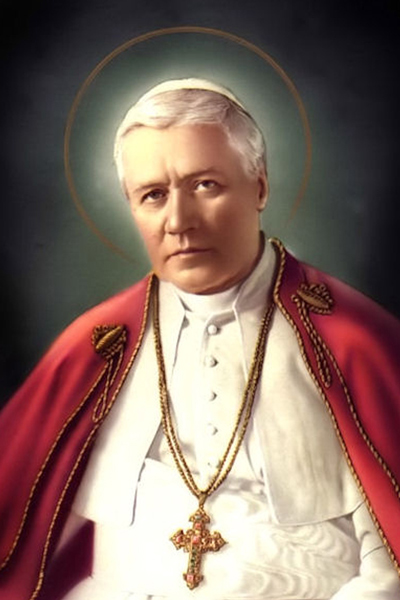